Clinton Fowler guest posts in the first installment of “Fast 3”, which analyzes the first wins of Chase Sexton and Michael Mosiman.

I get the unique privilege of sitting in the broadcast booth next to Ricky Carmichael and Leigh Diffey/Daniel Blair/Todd Harris each week. My job is to feed them statistics to enhance their analysis and commentary of the coverage. Hopefully some of their talent will rub off on me and I can deliver some unique insights you’ll enjoy.

In the first “Fast 3”, I cover the two new first time winners and one highly anticipated prospect that scored his career best at the 2022 San Diego Supercross, round 3 of the Monster Energy Supercross Championship. I hope you enjoy the insight. If you have any suggestions for future posts, please don’t hesitate to reach out to me @3lapsdown.

This past weekend in San Diego, Chase Sexton became the 66th unique rider to win a 450 main event. He also became the 33rd rider to win on a Honda, joining a list of the sport’s all-time legends. Read that again, closely: 66 unique (different) riders have won premier class main events in Supercross history. Exactly half of those riders got at least one win on a Honda. (keyword: unique). For context, Yamaha has the second most unique winners (21).

Honda is (by far), the most dominant in this statistical category. With the domination of Yamaha’s Bob Hannah (1977-1979) the 1970s were bleak. Marty Smith got Honda’s first supercross win on March 27, 1976 when he won the Pontiac Supercross. Smith took 3 wins total on a Honda in the 1970s and Marty Tripes took just 2 victories for Honda.

Things really took off in the 1980s. Chuck Sun won the 1980 Atlanta Supercross (his only SX win) and Donnie Hansen scored a handful of wins and Honda’s first championship in 1982. Then the floodgates: Johnny O’Mara and Bob Hannah (7 wins each), David Bailey (12), and Rick Johnson (25) were the biggest (but not the only) red riders to win SX races in the decade that gave us Nintendo, The Goonies and Aqua Net.

I reached out to the 65th 450SX winner, Zach Osborne, to learn what his first meant to him and how it built his confidence. Zach had raced 28 main events and, like Sexton, had some tough breaks that cost him an earlier win. He reiterated what Ricky Carmichael said on the San Diego telecast, “Once you graduate from the 250 class, you have to learn how to win all over again.” Osborne got his first and only career win in at the 2020 season finale in Salt Lake City.

Specifically, Zach said maybe you’re “halfway up the ladder. There are so many things that go into even getting to the race or getting a chance to win one of these things so when you finally do it’s huge!”

Congrats to Chase Sexton on his 1st win and the 33rd rider to do so on a Honda.

Michael Mosiman’s first career win is also the first 250SX win for GasGas. This is Mosiman’s 5th season and he’d been on the podium in 4 of 34 career main events, including one 2nd place at round 4 in Indianapolis 2021. He’s been poised to win a main event, but simply hadn’t put an entire race together. Case in point, he led 7 laps the very next round after his career best 2nd last year, but slipped back two positions to finish 3rd that night. He’s now the 117th rider to win a 250SX.

It got me thinking: who won the first 250 race for each manufacturer? Remember, these wins below all happened on 125cc two strokes.

Congrats Michael, you’ve joined a small group of fast professionals to get the first class win for a manufacturer.

Like many before him, Carson Mumford was a young prodigy expected to win races early and often. He was an amateur superstar that grew up racing for the Amsoil Factory Connection Honda team. Many will remember he had a ‘factory’ Honda CRF150R that he raced in 2016 or the fact that he swept the 250B Limited at Loretta’s back in 2018 before turning pro for the 2020 Pro Motocross season.

His rookie supercross season in 2021 was a far cry from the expectations of his amateur career. He entered 7 races for the Chaparral Honda team but only made 4 main events and averaged 18th place. He has not given up though. He’s got Davi Millsaps (2006 250SX East Champion) helping him train mentally and physically for the demands of the professional ranks.

In San Diego, the hard work paid off with a career best 6th place. He rounded the first lap in 3rd place and got some invaluable experience running with the fastest guys in the class. Now the question is whether or not he can follow it up with another Top 10 finish this weekend in Anaheim?

If you enjoyed this story and want to see more, buy a t-shirt or piece of art from The Shop! All the revenue is poured back into keeping this going. 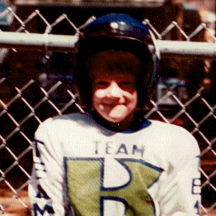